On Tuesday, 23 February 2016, the Department of Communications tabled the FPB Amendment Bill before Parliament’s Portfolio Committee on Communications. Once enacted, the Bill would underpin and legitimise the introduction of the controversial and much-disputed Draft Online Content Regulations proposed in March, 2015.

The Bill seeks to, inter alia:

To the extent that it seeks to establishes a co-regulatory regime, the Bill envisions the exemption of members of recognised industry bodies whose rules and regulations comply with those established by the FPB such as: 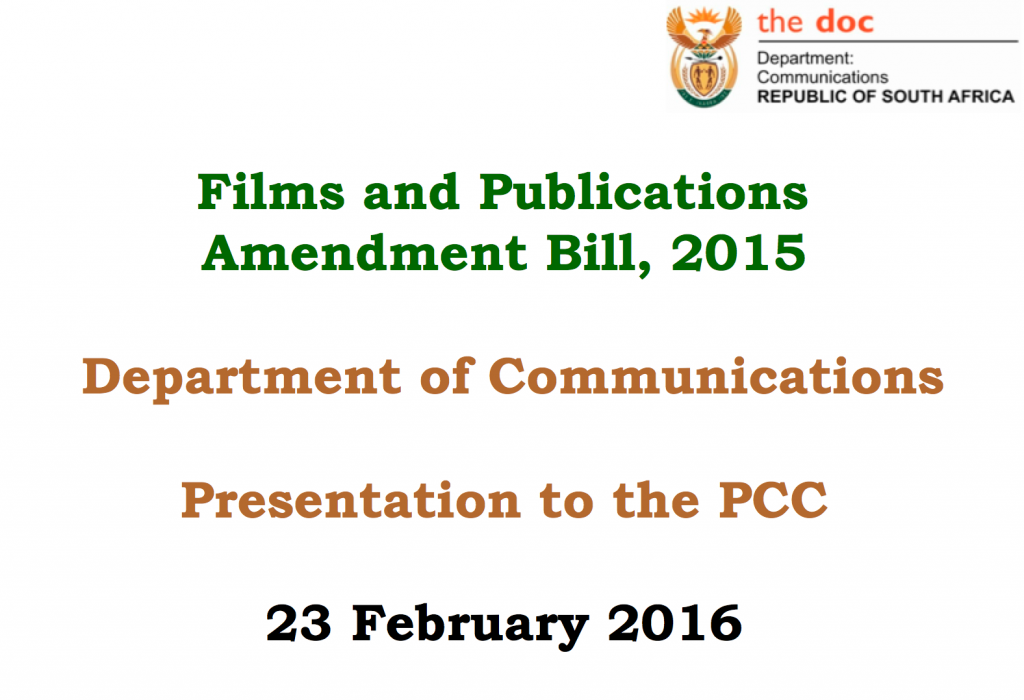 Click this image to see the full presentation by the Department of Communications.

While the Bill was generally well-received by the Committee, a number of concerns were raised by MPs.

Chief amongst these concerns across all political parties represented was the tabling of the Bill without the Department having undertaken a public participation process in line with constitutional requirement.

The DoC and FPB indicated that the had, indeed, undertaken a public consultation process in 2012, during the fourth administration (and Parliament) in which industry was consulted and was invited to make representations. They were, therefore, of the view that they had met the constitutional imperative. A representative of the FPB stated that “our take on the Bill after it was approved by cabinet which approved it in August, last year, was to put it through the Parliamentary process…” and it was up to the Committee to further “enrich” the public consultation process if it saw fit.

Members of the opposition were concerned by the establishment of the penalty committee, particularly concerning its independence. They called for the Bill to be specific about what or whom the Committee would be independent from, starting with an explicit assertion of its independence from political and commercial interests.

Further concerns around the appropriateness of the creation of criminal offences to be investigated and prosecuted by, and penalties imposed under the authority of the FPB instead of existing law-enforcement agencies.

To this, the FPB responded that reporting every complaint and/or infraction provided for under the FPB Act as amended would be “draconian,” indeed. Further to this, it stated that serious criminal offences would be referred to SAPS and that the penalty regime would provide for the more efficient resolution of administrative offences.

The FPB asserted that where there were overlapping mandates between itself and other public institutions, including law-enforcement agencies, it would continue to cooperate with these in the exercise of their mutual and respective mandates.

Pressed on the artificial distinction it sought to make between audio and audiovisual content services distributed through linear broadcasting and online streaming, respectively, the FPB insisted that while ICASA had purview over the former, it had full authority to oversee the latter in light of the regulatory vacuum over video on demand services.

The FPB representative emphasised that “what is very clear is that the internet mandate has been passed onto the FPB”.

The Committee acting chairperson committed that it “being the popular view, for now,” the Committee would go the route of soliciting representations on the Bill in a public participation process.