Letter to Minister: Progress Report on Commitments Made in 2013

Letter to Minister: Progress Report on Commitments Made in 2013 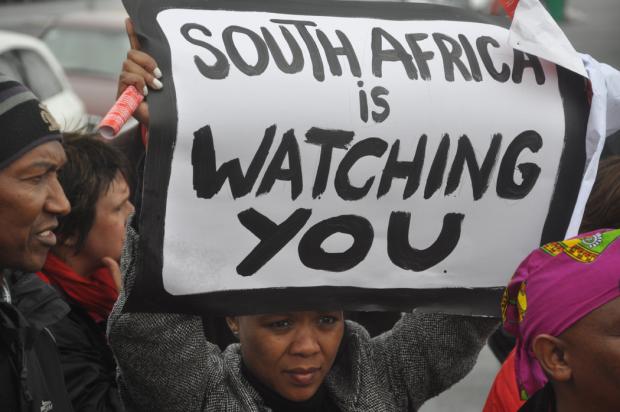 RE: Progress Report on Commitments Made in 2013

In August 2013, you set out the prioritized aspects of the DoC programme for your term with some specific timelines. On 5 November 2013, you gave a welcome report to Parliament on the progress you and the Department had made on those commitments.

Next week, on 18 and 19 February 2014, you will be giving a further progress report to Parliament and the people of South Africa. There are some specific areas which, the SOS Coalition would appreciate further feedback on in your progress report:

The Coalition welcomes your launch of the National Integrated ICT Policy Green Paper on 24 January 2014 as well as the extended 24 March 2014 deadline for public engagement with the Green Paper.

i. What are the targeted dates for each of the remaining milestones in the review process?
ii. What specific efforts has the Department undertaken in ensuring the widest possible public engagement in the process?
2. National ICT Forum

The Coalition welcomes the Ministry’s recognition of the importance of establishing such a forum. It is our view that this forum will provide civil society, especially, a further opportunity for substantive engagement with the Ministry and other stakeholders.

i. When will the forum meet?
ii. What will the scope of engagement and expected outcomes be at this forum?
3. Community Media

We welcome your commitment to further supporting community media, including community broadcasters, in South Africa through the formulation of a new Community Broadcasting Support Policy by the end of the 2013/14 financial year.

However, we believe that such policy, because it will directly affect community broadcasters, should only happen after the negotiation and formulation of an Integrated National ICT Policy.

Further, we note previous policy and legislative amendment proposals which, in seeking to support community broadcasters, also sought to fundamentally change the way in which community broadcast media operates in the country, without any ostensible engagement with such broadcasters who service not only geographical communities, but also communities of interest.

Therefore, we urge you to stay the formulation and passing of such policy until after the ICT Policy Review; and to rather bring what proposals you might have to the Review Panel to be thoroughly engaged with and negotiated by all stakeholders in the ICT Policy Review process.

The Coalition welcomes the development of an effective spectrum policy as a priority for the Ministry. While it is our belief that such policy must be informed by the outcome of the ICT Policy Review process, the Ministry must ensure that sufficient spectrum be allocated to broadcasting, and public service broadcasting (including community media), in particular.

The Portfolio Committee on Communications has now agreed to amendments only to the Electronic Communications Amendment Bill which agreed amendments are contained in B17A – 2013. Unfortunately SOS continues have a number of concerns with the Bill and reiterates its opposition to the following proposed provisions of the ECA Amendment Bill for the reasons set out in note 1, below.
The Coalition will continue to engage Parliament and the President to not adopt those provisions which pre-empt the outcome of the ICT Policy Review.

The Amendment Bill is set to be tabled before the Parliamentary Portfolio Committee on Communications for adoption in spite of some unconstitutional provisions included therein. The Coalition will continue to engage Parliament and the President to not adopt those provisions which pre-empt the outcome of the ICT Policy Review.

The Coalition welcomes your efforts in bridging the digital divide between the haves and have-nots, particularly in rural and peri-urban areas. The Coalition wishes to remind you that universal access also includes universal access to broadcast media, and urges you and the Department to continue to prioritise and strengthen your efforts in bridging this divide.

We note with concern the continued delays which have beset the launch and roll-out of DTT in South Africa. While we appreciate that these challenges are not entirely of the Department and your Ministry’s doing, we are worried that 2014 will pass without a successful commercial launch as we saw in previous years, further threatening public service broadcast media in South Africa.

i. What is the latest roll-out plan and targeted deadlines for the key milestones in officially beginning the migration?
ii. What contingencies have been put in place to ensure that this roll-out plan and targeted deadlines are met should the President appoint another incumbent into your position, at any point following your receipt of this letter?

The Coalition notes with ever-growing concern the ongoing management and governance problems challenging the SABC. Since your appointment of the Joint-Task-Team (JTT) in 2013 which was set to investigate, stabilise and resolve some of the systemic problems which have beset the SABC, the following has emerged:

• On 3 February 2014, the SABC announced the resignation of Ms Lulama Mokhobo, from her position as GCEO of the public broadcaster, effectively leaving the SABC with no permanent senior executive staff;
• On 4 February 2014, the SABC tabled an unfavourable report on its Skills Audit which spoke to the skills deficiencies at the management level as well as ahead of the migration to DTT;
• On 17 February 2014, the Public Protector will also be giving what is expected to be a damning report on allegations of maladministration, systemic governance deficiencies, abuse of power (including executive power at the level of the Ministry) and the irregular appointment of the Acting COO at the SABC.

i. What successes can you report on the part of the JTT and its terms of reference?
ii. What is your specific proposed plan of action for the SABC in respect of these latest developments and rescuing the SABC?

Further, on 05 November 2013, you assured the people of South Africa through the Parliamentary Portfolio Committee on Communications that the deadlock which had left the COO position unfilled with a permanent incumbent would be resolved within a matter of weeks and the recruitment process for a permanent appointment begun without delay.

i. Has the deadlock been resolved?
ii. Why has the recruitment process not yet begun?
iii. When can the recruitment and appointment of a permanent COO in the SABC be expected?

We look forward to your specific responses to each of these issues.