Submissions in respect of the parliamentary inquiry into the SABC Board in line with s15A of the Broadcasting Act, 1999 – Supplemented

There is NO SABC Board

SOS Submission on the SABC Board Inquiry Interim Report

Submissions in respect of the parliamentary inquiry into the SABC Board in line with s15A of the Broadcasting Act, 1999 – Supplemented 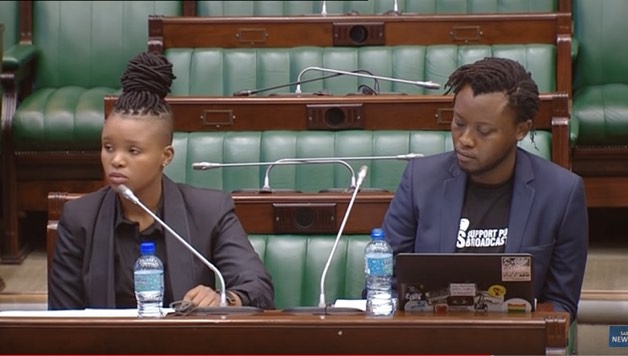 Firstly, the crisis of independent and credible news and current affairs programmes to the vast majority of citizens and residents has been a recurring theme over a protracted period. The crisis has been particularly pronounced through the month of July, the critical month proceeding South Africa’s local government elections. This followed the suspension of journalists for challenging editorial directives which have been found to promote self-censorship. This crisis is linked directly to the editorial values of the SABC and those charged with their preservation both at the level of the Board and operational staff.

Secondly, there appears to be a looming financial crisis for the SABC of a scale last seen in 2008/9 when the SABC was forced to seek a commercial loan to the tune of R1,4 billion. This crisis seems, in the last year, to have been further exacerbated by a number of concerning irregularities in respect of the content commissioning process (the SABC has abandoned its transparent request for proposals processes), as well as a number of ad-hoc financial awards to staff and local musicians. Adding further to this has been the impact of the unilateral 90% local content policies which had not been planned for and impacts directly on the SABC’s commercial revenue – which remains the principal source of revenue for the national public broadcaster. In addition to this has been the impact of the cost of the mass-scale purging of staff through both regular and ostensibly irregular means resulting in the payment of golden handshakes as well as legal and settlement fees on a mass-scale. Also, in a very recent move Motsoeneng has proposed that all contract staff be given new 5 year contracts, without first assessing the financial costs of these contracts to the corporation.

Thirdly, and perhaps of the most relevance, has been a failure of due and diligent governance by the SABC Board which the Public Protector in her 2014 report, When Governance and Ethics Fail, reported as having reached pathological levels of crisis, and was outlined to the Committee in Messrs Naidoo and Mavuso’s respective submissions in the Committee meeting of 06 October 2016. In addition to this has been the outright failure of successive Boards to see through the implementation of a raft of critical recommendations made by several public authorities including the National Treasury, the Auditor General of South Africa and the Special Investigations Unit.

Unlawful conduct by and/or without the intervention of the Board

Unlawful revision of editorial policies and subsequent unlawful dismissals It is widely known that the SABC’s editorial policies were last revised and adopted in 2004 following wide and robust participation by the public at large. Revisions to and the adoption of these policies were required to have been made in or by 2009. By a simple calculation, it is clear that the SABC Board failed to comply with its own policies, read together with the Act, to revise these policies by no less than 7 years. This is a critical issue which the Coalition has been campaigning around since its inception through engagement with the then SABC Board as well as petitioning Parliament several times to intervene where the Board had failed. Some months after learning that the policies had been revised and adopted in January 2016, and following attempts at engaging SABC management responsible for managing the process, the Board as well as the Committee, we together with Media Monitoring Africa laid a complaint before ICASA’s Complaints and Compliance Committee concerning the procedurally irregular and unlawful revision of these policies. The particular contravention concerns the Boards failure to comply with its statutory requirement to ensure that there is public participation in the development of the policies […] by inviting and considering public comment on such policies and by other means.

The impact of this unlawful conduct by the Board has been widely-documented, and was brought into sharp relief following the unlawful editorial directives to manipulate news and current affairs programming by Mr Hlaudi Motsoeneng in his capacity as newly-designated Editor-in-Chief of the SABC in terms of the unlawfully revised policies. This was followed by the unlawful summary dismissal of the so-called SABC 8 journalists who refused to comply with these clearly illegal, unconstitutional and anti-democratic policies and directives.

In addition to unlawfully revising the editorial policies, the Board has also presided over and was directly responsible for the SABC’s breach of employees’ labour rights. From what is reported to us by our SABC union members and is frequently reported in the media, the purging of staff is not an anomaly but a clear pattern of behaviour by the SABC’s senior executive management, enabled by the Board. Indeed, this pattern of staff purging was outlined in detail by the Public Protector in her report, When Governance and Ethics Fail and continues to happen in key strategic areas of the SABC’s machinery including finance, procurement, commissioning as well as with the outgoing CEO, Franz Matlala, having served no more than four months in the position.

Linked to the purging of skilled staff at the SABC, we are reliably informed by members of its staff about the extent to which there has been a breakdown of proper HR policies, seemingly with the assent of the Board, minimally through their failure to act against this. These members of staff gave requested us to put before this Honourable Committee how, in addition to the brain drain that has been happening at the public broadcaster, there have been irregular appointments and rapid promotions of unsuitably qualified staff who have aligned themselves to Mr Motsoeneng. While I cannot submit this information as reliable evidence because of its legal status as hearsay, in addition to the extensive testimony that you have heard through the course of this inquiry to this effect, it behooves us to draw to the Committee’s attention to the findings of the public protector pointing to the abuse and utter disregard of proper HR processes in the appointment of and promotions of staff – most notably concerning the circumstances under which not only Mr Motsoeneng but Ms Sully Motsweni were appointed.

It is also of critical importance for us to further draw your attention to the skills audit process at the SABC. The Committee will remember that it was the Auditor General, in his 2010 report on the SABC, made a binding recommendation to the SABC to undertake a thorough skills audit and develop an up-skilling programme of action in order to align the skills of staff at the public broadcaster to its needs not only in the current and exceedingly hostile broadcasting environment, but into the digital broadcasting era. The SABC under the then Ngubane Board, repeatedly dragged its feet and failed to undertake the audit until the PPC on Communications, through our persistent engagement, compelled the SABC to do so in 2013. The audit revealed some damning evidence of a total misalignment between the skills in the SABC and what it needed to be a functioning broadcaster – notably, that hairdressers were running finance departments. As far as the up-skilling programme of action, which the SABC promised to the committee by the end of the 2013 calendar year, remains outstanding; pointing to a failure of the Honourable PPC to undertake effective oversight of this key asset.

Further, the Committee is well-aware of the iterative unlawful appointment of Mr Hlaudi Motsoeneng as SABC COO by the Board and Minister of Communications This in spite of the peremptory recommendations made by the Public Protector and confirmed by the Western Cape High Court and Supreme Court of Appeal. In addition to the yet to be disclosed legal costs paid for by the SABC, the Board’s insistence in defying the rule of law and protecting Mr Motsoeneng at all costs has directly resulted in the escalation of the reign of terror SABC staff have been subjected to under Motsoeneng, the chilling effect of self-censorship that has run through the Corporation in spite of orders against practices which encourage this by ICASA’s CCC and the South Gauteng High Court and, frankly, poor business decisions that have placed the SABC and its financial position in a precarious place.

The Fiscal Position of the SABC
The Coalition has written to the Committee on this matter before. We reiterate our concerns.

Further to the crisis of independence and accountability is that of the SABC’s poor financial management. The SABC finds itself, once again, on the precipice of the same position it did some nine years ago where, as a result of the delinquency of the dissolved Board in its failure to discharge its fiduciary duties (and drew payment for this disservice to the public). In the face of a global economic crisis which appears to be re-surging, once again, we have are approaching another financial meltdown of the SABC, and again as a direct result of the delinquency of the Board. Of particular concern has been:

These issues have been raised time and time again through successive investigative reports undertaken by constitutional bodies and other public authorities including:

Priority Recommendations for the interim board

We thank the Committee for the opportunity to make these submissions and are available for any further engagement on this matter including further participation in the inquiry.

These submissions are made by Sekoetlane Phamodi on behalf of the SOS Coalition.