SOS URGES ALL TO UNITE AGAINST CORRUPTION

The Minister of Communication issued a draft proposal for the implementation of the Draft Community Broadcasting Support Scheme on 1 July 2015. The scheme is aimed at facilitating funding opportunites in the community broadcasting sector.

Since 1998 the Department of Communications(DoC) has been managing the Community Radio Support Programme (CRSP). While the support started as purely infrastructural, it later grew to include content production, signal distribution subsidies and capacity building.

According to the Draft Community Broadcasting Support Scheme, the DoC now finds that its broadcasting support initiatives should branch further by implementing assistance to the community television sector.

With this in mind, the draft Community Broadcasting Support Scheme outlines that at the heart of the support scheme is the need to create an environment where community broadcasters and their communities are empowered and provided with resources. This in turn will help sustain community stations in order to contribute to socio-economic development and job creation.

According to the Department, the aim of the Draft Community Broadcasting Support Scheme is not only to reshape and digitise the broadcasting sector in South Africa, but to also prepare the community media sector for the future and making it fit for the times and community it serves.

Although the draft acknowledges that in the past many barriers prohibited disadvantaged communities from establishing their own community broadcasting systems as they didn’t have access to resources, expertise and skills.

The draft proposal states the following as the requirements for applicants

It is proposed that projects be evaluated on the basis of the following criteria:

(2) Innovation: Does the project represent in innovation in the community broadcasting sector?

(3) Community Partnership: Does the project engender partnerships with other community organizations?

The document further adds that unless stated otherwise stated in the preceding paragraph, this scheme does not cover the following:

(a) Activities not related to broadcast

(c) The purchase of premises

(f) Projects not complying with licence conditions nor corporate governance

(h) Technical briefs submitted as part of any licensing process

(i) Advertising and promotion material

(o) Rental fees of the station’s own studios

The Department expects to draw funding for the scheme from Parliamentary appropriation, grants and donations. It further states that the budgeting process will take into account the different needs of both community radio and and TV. While a dedicated Community Broadcasting Support Unit will be set up to ensure capacity and management responsibilities are met; which will further carry out other activities including sector mobilisation and stakeholder consultation research into the issues confronting the sector.

The Draft Community Broadcasting Support Scheme will distribute funding on a proposed 70%:30% ration respectively. According to the document the rational for the proposed ratio is due to the “high cost differential between television and radio, it is quite appropriate that a transparent funding ratio be put in place to ensure equitable distribution of the funds. This is motivated by the level of community radio and its financial requirements on one hand and the urgent need to develop community television on the other.” However the ratio will be reviewed by the Cabinet after 5 years after of approval. 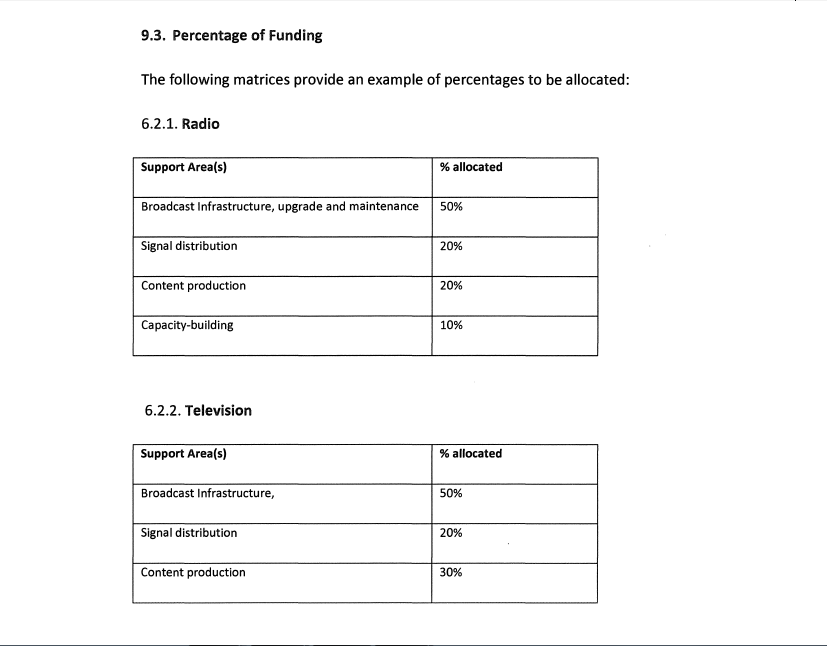 A deadline of 30 September 2015 was given for public comment and submissions.