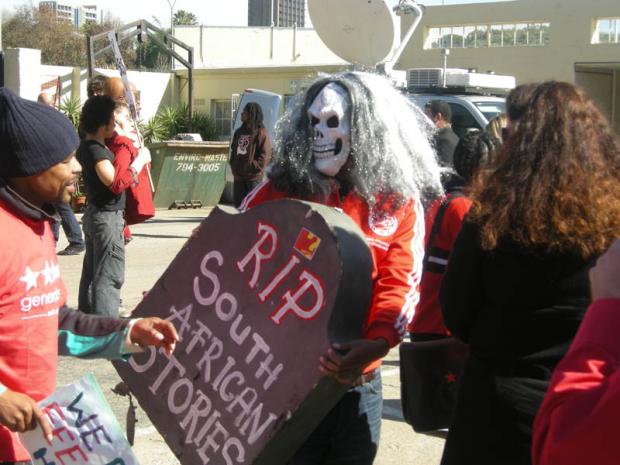 The SOS Coalition welcomes today’s open letter to the SABC Board by the General Secretary of Cosatu, Zwelinzima Vavi.  In his letter, comrade Vavi enumerates the series of problems that have plagued the SABC since 2007 – many of which remain unsolved.

Since its inception in 2008, the Coalition has been at the forefront of the call for the rescue of the SABC from the many forces which have stripped its power and ability to be a successful people’s broadcaster. We recognize that not all of the challenges facing our public broadcaster are of its own making. As Vavi points out, the SABC’s disproportionate reliance on commercial funding has had a profoundly negative impact on its ability to meet its mandate to “reflect South African attitudes, opinions, ideas, values and artistic creativity”. Further to this have been instances of executive interference in the running of Board processes as was highlighted by the Public Protector’s report: When governance and Ethics Fail.

This being said, there remains a series of problems for which the SABC, including its Board, must take responsibility. These include:
• The intractable instability of the group executive of the SABC, which has reduced the SABC’s reputation as a reliable and trusted public institution to a devastatingly weakened state;
• The Board’s failure to carry out, four months after its release, the remedial action required by the Public Protector in her report;
• The Board’s failure, amidst growing public distrust in the news and current affairs of the SABC, to oversee the conclusion of a widely consultative editorial policy review process, which is now nearly five years late.

The Coalition stands in full support of the analysis of the Communication Workers Union (CWU) and the Broadcast, Electronic Media and Allied Workers Union’s (BEMAWU), as articulated by comrade Vavi, today, on what needs to change in the SABC if it is to truly become a people’s broadcaster.