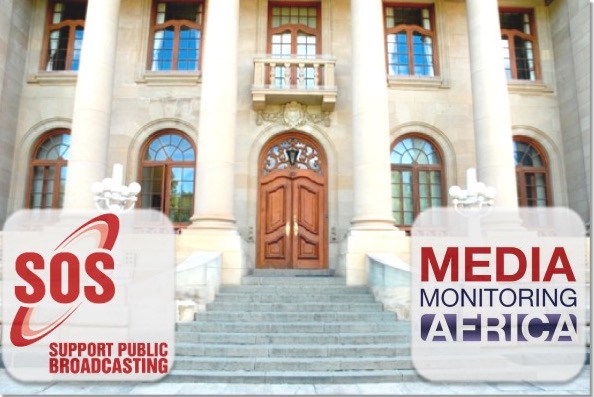 The SOS Coalition and Media Monitoring Africa (MMA) note, with deep concern, the recent comments made by Communications Minister, Kubayi Ngubane on the Memorandum of Incorporation (MOI) for the South African Public Broadcaster (SABC). Specifically, it is important to  address the following:

The Minister is seeking to appeal a critical judgement on a case lodged by SOS, MMA and the Freedom of Expression Institute which sought specifically to challenge the role and power of the Minister in appointing members of the SABC Board and removal of senior executives.  As it turned out the case was a significant victory for the independence of the SABC Board and it found the powers of the Minister to be unconstitutional.  Unsurprisingly, the given that significant powers of interference had been taken away from her, the Minister appealed.

In order to ensure that the SABC Board could make critical appointments and was not left in a state of deep crisis, all parties agreed to an interim order that would be in place until such time as the appeal by the Minister had been heard.  The effect of the Interim order was to ensure that the SABC Board could make executive appointments, AFTER consultation with the Minister.  We have seen that as a result, the SABC has been able to appoint a new COO.In December 2017 the Minister lodged an appeal with the High Court to rescind the judgement arguing that it was based on an invalid MOI.  The Minister is correct in asserting that the MOI of 2014, submitted by former Communications Minister, Faith Muthambi, was invalid as it was never registered with the Companies and Intellectual Properties Commission (CIPC). That MOI gave undue powers to the Minister, allowing them to appoint the COO, CEO, and CFO of the SABC. It is important to note that while the MOI of 2014 was invalid, it was relied on by Faith Muthambi to allow her to interfere directly in the SABC appointments processes.  It is also important to note that it was the Minister that submitted in her court papers the MOI in the court case.

It is critical to note that the 6 December 2017 Interim Court order between the Minister’s counsel and applicants’ counsel, states that all parties agreed that they would abide by an independent appointments process until the appeal by the Minister is heard. Accordingly, any move to seek to rescind the original judgement must be seen as an attempt to destabilise the SABC, confuse the key stakeholders including the Portfolio Committee on Communications and a desperate effort to reclaim powers and authority found by a Court to have undermined the independence of the SABC and contravened the Broadcasting Act.
Furthermore, the Minister has that she is currently in the process of amending the registered MOI of 2013, signed in my former minister Yunus Carrim, with the hope that this will finally resolve the confusion around the MOI. Part of the problem with this, however, is that a number of provisions of the 2013 MOI are themselves unconstitutional or otherwise unlawful and were replicated in the 2014 MOI.

Consequently, SOS is of the view that the correct process going forward is to approach the High Court to amend the original judgment to correct the references to the 2014 MOI and replace these, where appropriate with the references to the provisions of the 2013 MOI. This is required because the issue at hand is not just about fixing an MOI or making sure that the right one is used, it is about making sure that any, and all, Communications Ministers are not given the power to assert undue influence over the running of the public broadcaster. The damage of the unregistered MOI, however, has already been done. Lest we forget, it was this invalid MOI that gave Faith Muthambi effective appointment powers, including or an unqualified COO (Hlaudi Motsoeneng), which then led to a maelstrom of governance and financial mismanagement at the public broadcaster. Accordingly, we call on the Minister to refrain from seeking to confuse Parliament Portfolio Committee on Communication and to allow for the correction and not the rescission of the judgement.