LETTER TO PARLIAMENTARY PORTFOLIO COMMITTEE ON COMMUNICATIONS (PCC):THE SOS COALITION URGES THE COMMITTEE TO CONSIDER PUBLIC OPINION ON THE SABC BOARD RECOMMENDATIONS 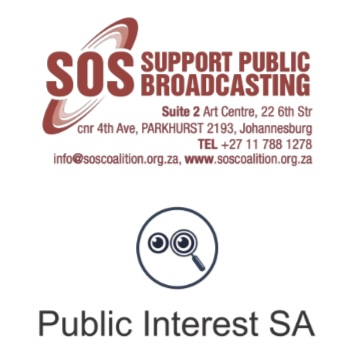 Public accountability and integrity are fundamental in ensuring that those entrusted with the exercise of public power and authority conduct themselves in a manner that conveys trust and fidelity to the laws.

SOS: Support Public Broadcasting Coalition (SOS) and Public Interest SA jointly reiterate their strong opposition to the shortlisting of Ms Mamodupi Mohlala Molaudzi for the SABC Board and we therefore urge the Portfolio Committee on Communications (PCC) to take public interest into account, as per the legal advice sought internally (recommending that objections by the public be taken into account) and refrain from recommending her name to the National Assembly for re-appointment by the President. In fact, Ms Mohlala ought not to have been recommended for the board in the first place.

Ms Mohlala elicits particular concern and both organizations have made separate written submissions alerting the Committee to wrongdoings and allegations she faces that negatively impact on her suitability for a board role. These include her current suspension as the CEO of the Property Practitioner’s Regulator Authority (PPRA), after a forensic investigation found that she contravened pension fund legislation, made irregular appointments of staff and contravened the Public Finance Management Act (PFMA). Further, while serving as an Independent Communication Authority of SA (ICASA) councillor, media reports indicate that Ms Mohlala “moonlighted through her legal practice including doing work for a telecoms industry player” which is a contravention of the Councillors’ Code of Conduct and of the ICASA Act. It is our understanding that Ms Mohlala is challenging the findings of the PPRA report and that she has not been convicted of a crime, however, the Board can ill afford having a member appointed under a cloud. Further, Ms Mohlala has already served a term and it is best that she makes room for an untainted candidate so that the Board can hit the ground running given its delayed appointment.

Lest we forget, Ms Mohlala, as an attorney, is not only an officer of the court but also a former Pension Fund Adjudicator who ought to know well not to contravene the provisions of the pension fund laws as she has been found to have done by the independently-commissioned PPRA forensic report.

In its submission, SOS further objected to the shortlisting of three other candidates namely; Mr Kgalema Mohuba, Ms Nomvuyiso Batyi and Ms Thandeka Gqubule-Mbeki citing allegation of misconduct and conflict of interest.

The SABC needs a strong and independent Board with candidates whose integrity is beyond reproach. The Board provides stewardship over the affairs of the SABC and must safeguard and advance its Charter. Section 13(3) of the Broadcasting Act, 1999, enjoins members of the Board to be persons of unimpeachable character, fit and proper to serve on the Board, and be committed to the objects and principles as enunciated in the Charter. Given the history of the SABC which is characterised by political interference, corruption, fraud, and dishonesty, and that the SABC Board has limped from one crisis to another in the previous terms (except for the most recent term), it is crucial to thoroughly scrutinise the shortlisted candidates to prevent history from repeating itself.

Frankly, an individual with a litany of allegations of wrongdoing including fraud, corruption and maladministration cannot be entrusted with the duty of overseeing and protecting the affairs of a crucial public institution such as the SABC.

We beseech the Committee to consider public concerns regarding shortlisted candidates we have raised concerns about in their recommendations to the National Assembly. The Act clearly states that the South African broadcasting system is owned and controlled by South Africans. Thus, matters relating to a national public broadcaster should prioritise the needs, expectations, and interests of the general public. Crucially, it is enacted that a shortlist of candidates be published – what would the purpose of public participation be if the public’s remarks are not taken into account?

These organizations’ fundamental concern is to safeguard the public interest and ensure that the public broadcaster is managed by individuals of integrity whose primary intent is to serve diligently in accordance with section 13(4)(b) of the Act, which stipulates that the Board should be made up of “persons who are committed to fairness, freedom of expression, the right of the public to be informed, and openness and accountability on the part of those holding public office”.

In the public interest, we call on the committee to not recommend any of the candidates that the public has objected to. There are sufficient duly qualified individuals under consideration for appointment or reappointment that the Committee could select from.

The outgoing Board has made important strides to help restore the credibility and sustainability of the SABC. It would be a reversal of such gains and a travesty of justice were an impression to be created that SABC Board positions are a sine qua non for certain members of our society notwithstanding their demonstrable lack of moral guardrails.